Or Strategy, Tactics and Accountability

The Bridge KS3 launch lesson aims to open up and problematise existing frames of references – or perspectives, if you will.  We establish the initial and individual frames of reference that students bring to judge the characters in a story, before taking them through the conflict of having to negotiate a group judgement, then construct a uniquely positively framed judgement.  The Vygotskian principle that ‘we become ourselves through others’ plays out in the development of perspective as much as in the social method of the lesson.

The full lesson plan and slides are available as one of our sample lessons on the Let’s Think in English website here.

We clarify the general and the specific civil war context then read this short text. 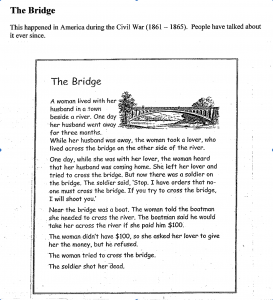 I asked each family member to complete the first activity silently and alone – as we would in the classroom.

These responses will not be lacking in thought, but they have not yet been socially tested – their reasoning made public and accountable.  This is the focus of the next activity – which I asked family teams to complete prior to coming online.

And so began the first synchronous session: four stacked rooms popping up on the lap-top like Celebrity Squares (some of us showing our age…) 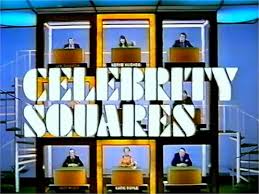 Who is most responsible?

There was a fairly swift and well-reasoned agreement across family teams that the woman herself was most responsible for her death.  She had free will.  She chose to take a lover and we might even judge her further for this amoral choice. She was warned that she would be shot and still crossed the bridge.  One team admitted that they had real difficulty in not selecting the soldier, as he pulled the trigger of the gun.  Without him, she would not be dead.  I invited other teams to enter this difficulty (difficulty and difference is owned by the group rather than being a cause for interpersonal conflict).  The wartime context is brought back in to focus.  A man shooting a woman is not the same as a soldier shooting a woman who claims freedom of movement in a territorial war.

My Mum interjected here that she accepted in part the rules of war are different to those in peacetime, but that history has too often been written and judged by men.  Did this woman have the choices available to her that we have assumed?  Did her husband leave her with resources and in safety?  Under what circumstances did he leave her – was he a heroic war volunteer or an egotistical opportunist?  Then, “I think this Bridge represents her dilemma and the way the country is torn apart.” Others began to come in and wonder whether it mattered whether the husband was fighting for the Confederate or Union Army and whether the woman, his wife, agreed with his cause?

Listen to that frame of reference switch – we have changed up several gears in one contribution.  Social-historical context, feminism and a dash of symbolism to boot.

How do I manage this sudden surge in complexity?

First I am accountable to the group to support them all to think well together.  I need to know the purpose and structure of this lesson well – I need to have internalised its strategy – the scripted questions – and be prepared to use live tactics – deliberate but unscripted.  I know that we will reframe our judgement of the woman and that the lesson hinges on us doing so.  If we do this too soon, some of our group will lose the thread.  We have not done enough shared, outwardly reasoned groundwork on the responsibility of other characters to establish existing frames of reference.  I also know that we need to have climbed inside all of these characters and their contexts for lessons 2 and 3 to gain traction.

So, I thank my Mum, acknowledging that this is a new way of thinking for the group and promise that we will come back to these thoughts later.

The discussion, returning to the ‘mid-ranking’ characters – the lover, boatman and soldier – was much more lively and carried greater differences in opinion.  How much did that soldier warn her? How did he say those words?  The boatman was asking for a lot of money for that crossing – just how necessary was that?  Was the lover’s refusal to give money a way to hurt the woman who had hurt him by returning to her husband?

Before moving to the next stage in the lesson, we pause and I ask if we can reflect honestly and openly for a moment.  After listening to the whole group discussion, is there anyone who feels they think differently about one of the characters?  Was there someone’s comment that brought about this change?  Publicly admitting to a change of view is exposing and courageous – even if it is about an inconsequential story.  The personal, ethical and moral belief system behind that judgement is not inconsequential.  My eldest stepped up (a Let’s Think veteran) and admitted that one family’s comments on the greed and exploitation of the boatman had led her to think of him more harshly than the lover who would naturally want the woman to remain with him and not return to the danger of the river crossing.

Making the space for a metacognitive moment…

The group are then invited to switch to a wholly positive frame of reference.  Can we think of a positive or good reason to explain why each character acted as they did?  We could then return to my Mum’s comments about the woman together and expand on these.  She may have been left in danger and with no resources.  A woman alone in a wartime context is in great jeopardy.  On top of this, her husband may have been abusive.

Once we had clarified the ‘flip’ in thinking, each family took just one character to perform the same mental flip.  The soldier was in danger of being court-martialled.  The boatman was only demanding justifiable danger money – perhaps supporting a wife and family.  The lover wanted to protect and keep her where she would be loved.  Beautifully done folks.  There was very little need for me to move ‘off script’.

There are moments when the narrative of the lessons run themselves.  It gives you the time to focus on the method.  After each ‘break-out’ session, when we each muted our video cam, I would make sure that I invited one of our young people to share their family’s thoughts with the whole group, deliberately trying to bypass the parents.  Cruel or justifiable?  I am trying to set an expectation from the start that we track the ideas in our ‘home’ group (quite literally in this case) and are accountable to sharing these with the whole group.  It’s a tough call.  I might not yet have the words to describe everything I heard – or to effectively summarise some ideas that were just beyond my understanding, ideas that are only just coming in to focus.

There were pauses.  And hesitations.  And fillers. Eye-contact of children looking at parents for help or rescue. I can’t say for sure.  Where there was a contribution then a silence, I said thankyou and asked if other family members wanted to build on this helpful start.  Where there was silence, I asked for ‘just one thing’ you remember the family saying.

The long game is self-efficacy.  In this context, when we think together in this way, I need each young person to hear themselves contribute and remember that others responded to their contribution.  Over time, an unconscious confidence builds on the memory that ‘what I say matters and makes a difference to what others think.’

What kind of text is this?

The lesson then takes a surprising turn – surprising at least for the learners, in that we draw away from the characters and take a bird’s eye view to classify this little text as a fable.  We have struggled to judge the characters because we are devoid of clues as to their motivation.  This is how fables are.  They are bold and bald.  Most stories we read for pleasure will not be like this.  The new break-out strategic question is therefore:

The slowing of thinking was tangible – this was a whole new challenge.  There was a sitting back in chairs and exchange of facial expressions.  When the family groups came back to share their ideas, the subtlety of their answers was beyond most responses given in lower KS3.  It would be wouldn’t it?  Remember the huge band width of proximal development I have here.

Tactics.  Don’t start at the top of the band width.  I ask an 11 year old to report back.

“We want to know more about the characters’ back-stories and decide who we are going to sympathise with.”

Thankyou – do we all agree this is important?

“Yes, but we don’t want to make this too simple, too black and white.  What has been great talking about this story has been the shades of grey.  Having moral tensions and uncertainties is more interesting than simple heroes and villains.”

(A visible, nodding agreement in the Celebrity Squares.)

Tactics.  I can now link back to my Mum’s comment about the woman being damned by history.  “So, would we want to build some sympathy for the woman but also make her more complex?”  There were also ideas about needing to know the history of the town, the setting – what was on either side of that bridge?  How was the town positioned in the war?  Again – at this point I can return to the idea of the Bridge as a symbol of a divided country and a divided woman.  We end by summarising the aspects of story that we think, collectively, will be important for enjoyment, admitting this can be quite different for different readers, but that there are some aspects we all seem to agree on.  I invite everyone to think beyond the session about which character they would choose as their protagonist.  Would they want it to be first or third person?  I can already hear some voices talking about wanting different viewpoints, some making their choices of just one character.

I must have taught this lesson more than 50 times in KS3 classrooms and with groups of teachers.  Its structure and strategic questions never change and yet the live lesson is always different, fascinating and surprising.  Tactical decisions have to be made about who to cue in early on, when to ask follow-up questions to encourage more elaborated thinking, when to pitch an idea back out to the whole group to consider, and when to press pause on a rich idea and then return to it so that the whole group are ready to connect with it and consider it.

I am certain that we lost some of our group at some points in the lesson.  I was concerned about a few family members going quieter as the lesson progressed.  The same thing happens in the classroom. But the live responses led me to think that perhaps we could maintain some of the most effective elements of Let’s Think in Lockdown.

“When can we do the next one Aunty Leah?”

Next up:  The Bridge 2 Openings

The Hidden Lives of Learners